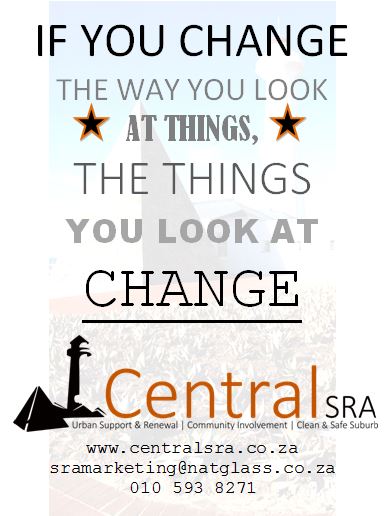 The Mandela Bay Development Agency (MBDA) is assisting the Central SRA with support and legal advice – the MBDA also falls within the demarcated area for the Central SRA.

The Mandela Bay Development Agency (MBDA), established in 2003 by the Nelson Mandela Bay Municipality (NMBM), with support of the Industrial Development Corporation (IDC), is a special purpose development company which has become the driving force behind urban regeneration in Nelson Mandela Bay. The Agency operates under a Mandate in terms of its articles of association and service delivery agreement with the NMBM. While the MBDA falls under the local authority, it operates as a separate entity but works closely with the relevant Municipal Directorates .

The MBDA’s aim is to project-manage regeneration of the Port Elizabeth CBD with a view to promoting economic and tourism development against the backdrop of urban renewal. The mandate area of the MBDA includes the central area of the city, including the CBD, as well as the existing harbour. While the metropolitan area covers roughly 1950 km², the Mandate Area is only 1039ha (10.39km²). However, since 2007, the MBDA has been mandated to extend its geographical reach to include other parts of the metropolitan area, such as New Brighton, Uitenhage and Despatch, the Happy Valley Area and the new stadium precinct. It is well known that Port Elizabeth, has historically gone through a long period of urban decay and decentralisation from the inner city.

The rationale for the establishment of the Agency in 2003 was to create a special-purpose vehicle that would reverse the trend of urban decay and bring people and business back into the inner city by leveraging existing assets. In 2002 a number of planning studies were undertaken for the Metro including a Vision for the Inner City and The Downtown Study which focused on the Central Business District. A major recommendation of those studies was the establishment of a Development Agency to implement a number of the projects identified at that time. In 2004 the Mandela Bay Development Agency (MBDA) commenced with its first catalytic project, viz the Environmental Upgrading of Govan Mbeki Avenue.